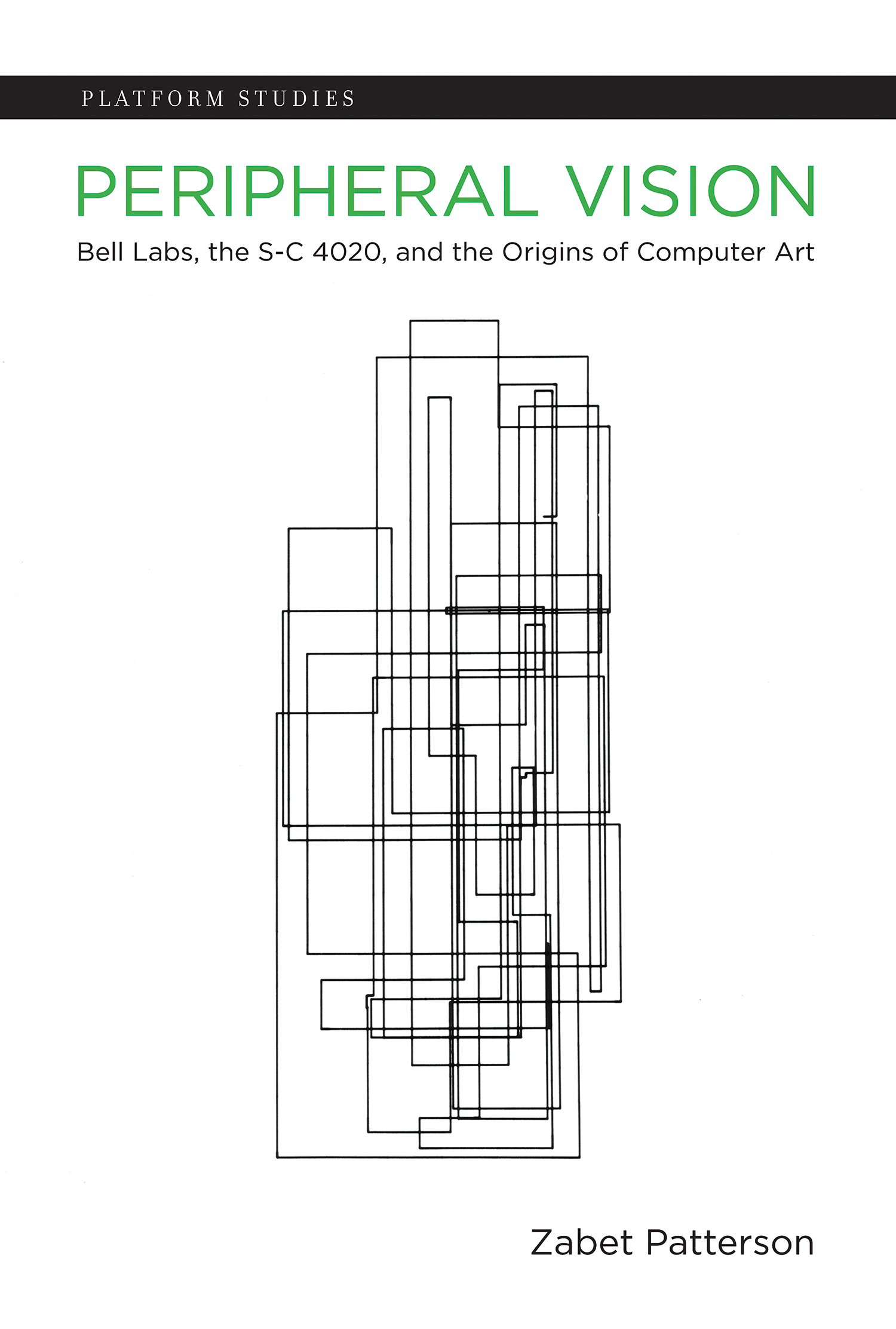 Peripheral Vision by Zabet Patterson is one of the books that I recently bought to learn more about the origins of computer animation and more specifically, computer art. This book focuses on the collaboration between artists and engineers at Bell Labs, and how they used the SC4020 peripheral device to pioneer computer art in the 1960s and 1970s.

For a book about art and history, I found it a bit lacking in imagery so I’ve looked up many of the people and objects that are described and added some images and videos throughout my notes.

Bell Labs was home to some of the most significant breakthroughs in science and engineering from the the 1920s to the 1980s. In the 1960s, some of the most interesting works at the intersection of art, science and technology were created with the Stromberg-Carlson 4020 at its Murray Hill campus.

The SC4020, also known as the Stromberg-Carlson Microfilm Recorder, was a peripheral device for use with mainframe computers such as the IBM 7090 or 7094. It was based upon the Charactron, a CRT screen, originally developed in the 1950s for the US Department of Defense for a computerized air defense system called SAGE.

The Charactron had a cathode ray tube with shaped-beam technology and could display vectors and characters, and had a high refresh rate to allow air force specialist to track airplanes in real time.

In 1959, Stromberg-Carlson built the SC4020, a computer-controlled microfilm printer and plotter, that consisted of the Charactron screen and an automatic operated camera enclosed in a light-tight compartment. It accepted instructions from the mainframe computer via magnetic tapes.

Collaboration betweens artists and engineers was spurred through an initiative called Experiments in Art and Technology (E.A.T.). Artists that were invited to the Bell Labs campus were able to access equipment that was far more expensive than anything they could afforded by themselves.

Simulation of a Two-Gyro Gravity-Gradient Attitude Control System (1963), via YouTube

Zajac was interested in visualizing the motion and orientation of an orbiting communication satellite. Sudden and dramatic changes in viewpoint could be achieved easily with computer animation, because the essence of computer film lies in numerical input rather than optical registrations of a physical camera.

Previously, the computer would print out numbers of the satellite orientation at successive instants in time and an animator would elaborately compute perspective drawings by hand.

A single basic program can generate far more than a single film, it makes possible a whole family of films. This program can be stored as a subroutine and called up as necessary as part of a film.

Zajac’s film was made possible, in part, by the creation of such a subroutine by Dr. Frank W. Sinden. Sinden used this to create an educational film called Force, Mass and Motion that illustrates Newton’s basic laws.

Most sequences in this film were made by a single programme of around sixty instructions, together with a dozen or so subprogrammes of five or ten instructions each. The subprogrammes would be responsible for drawing circles, drawing arrows, specifying the law of attraction and controlling the camera.

In 1965, the Howard Wise Gallery in New York held the first exhibition of digital art in the United States titled Computer-Generated Pictures and showcased work by scientists Dr. A. Michael Noll and Dr. Béla Julesz. Art critics did not know what to make of it and not a single work was sold.

Noll unexpectedly decided to investigate computer art, after a computer-generated data graph had gone haywire because of a programming error and the result resembled a modern abstract painting.

Noll was interested in restricting the chaotic effects of purely random number distribution with a sort of pseudo-randomness that was calculated to generate a pleasing appearance. The tension between control and disarray carries through a number of Noll’s works.

Some of his early works can be found on his website.

Béla Julesz used the digital computer and microfilm printer for his work in perceptual science. The general understanding of stereopsis, the visual perception of a three-dimensional world, was that it could only occur after monocular recognition. Julesz proved that stereopsis can and does occur in the complete absence of monocular form using random-dot stereograms. 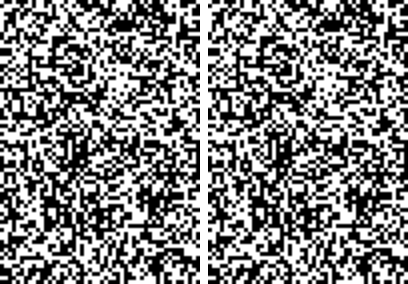 Example of a random-dot stereogram, via Wikipedia

The random-dot stereograms were created with the computer that generated sets of random patterns that consisted of various characters from the Charactron screen, for producing different brightness levels.

Studies in Perception I, also known as Nude, via Digital Art Museum

It is one of the earliest, if not the first, example of ASCII art.

The original picture was scanned into the computer and divided into approximately 5000 points. For each point, the brightness level was read and a small square pattern that consisted of the SC4020 characters to replicate a level grayscale was chosen. Nude had 8 possible brightness levels, and for each level one of two random patterns would be selected.

Between 1964 and 1970, experimental filmmaker Stan VanDerBeek worked with Kenneth Knowlton at Bell Labs to create a series of computer animations called Poemfields.

The Poemfields animations were made using the SC4020, an IBM 7094 mainframe and Knowlton’s TARPS language (Two-D Alphanumeric Raster Picture System). TARPS was based on the computer animation programming language BEFLIX (Bell Flicks) that Knowlton created in 1963.

The series was named in reference to the Charactron screen, which VanDerBeek viewed as a mosaic field that orchestrated letters and characters. The Charactron could not produce delicate curving lines, but grids, gradients and blocks could be created using specific letters. The numbers and letters were overlaid with hand-painted blocks of color.

Lillian Schwartz made some of the most important computer art of the 1970s at Bell Labs with Kenneth Knowlton. She was taught how to use the computer and although she found the process of waiting for 2 or 3 days between the tedious keyboard work and final output frustrating, she recognized the potential of a non-real time apparatus that afforded for both error and the wonder of surprise.

She used this “blindness” to her advantage and created generative films with effects that were unpredictable for the viewer, similar to the process of the creation itself. Her first computer-animated film was Pixillation (1970) were she combined computer animation with film animation, processing and coloration.